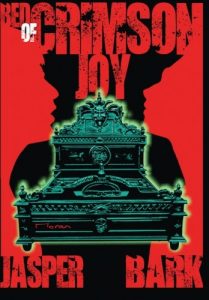 When elderly woman discovers a magical sex bed in her neighbor’s spare room while house-sitting she…well…she touches herself. Then she lures her equally aged husband over for a romp under the canopy. The four-poster is carved in erotic designs, the canopy is a masterpiece of sexual art derived by an artist that is infinitely more flexible and open-minded than the average person. Whatever’s going on here has to be good, right? I mean, it gets old folks to make love like they were newlyweds and, oops, the wife gets in a family way. Okay, we knew that any story by Jasper Bark was bound to go awry sooner or later. So it turns out the young couple next door entered into a pact with an old man to inherit his riches but there’s a clause, written in an unfamiliar language, that turns out to be binding in more than one sense of the word.

Mr. Bark’s stories always leave me feeling revolted and a bit nauseous; Bed of Crimson Joy is no exception. They do, however, also leave me glued to my computer awaiting the announcement of his next book so that I can devour each of his new works the way I consumed the previous releases. Jasper Bark is an author of enormous talent and little concern for the continued mental health of his readers. Bed of Crimson Joy is another masterpiece in a long series of masterpieces and I hope this crazy bugger keeps his creative juices flowing for decades more. I love him for twisting my mind in so many delightful and disturbing ways. Jim Dodge