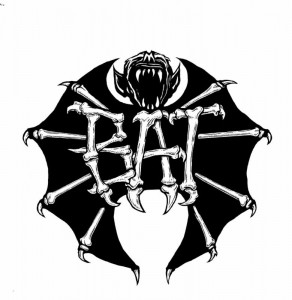 BAT, the unholy supergroup featuring Municipal Waste guitarist Ryan Waste on bass/vocals, former DRI drummer Felix Griffin and Volture guitarist Nick Poulos, is very pleased to announce their recent addition to this year’s Gwar B-Q in Richmond, Virginia alongside the likes of The Descendents, Cro-Mags, Ghoul, Ringworm, Child Bite and more! The band’s Gwar B-Q appearance follows a headlining performance in Raleigh and serves as a precursor to a rare run of live abrasions through Richmond, Cleveland, Chicago and Pittsburgh in September.

Comments Waste of the oncoming onstage demolitions, “After finishing up our debut full length album on Hells Headbangers this summer, we in BAT are gearing up for a short run around some rad US festivals. The first being the Gwar B-Q in our hometown of Richmond, which is always wet and wild. Come September, we hit the road again to play in Cleveland at the Hell’s Headbash. We’re thrilled to play with our pals in High Spirits and Midnight on the opening night. Beforehand, we’re cramming in another hometown gig and hitting Chicago and Pittsburgh to round out the Labor Day weekend. Come rage with us and always beware of the BAT!”

The Virginia/Texas metal punk marauders in BAT released their Primitive Age EP last year on cassette via Tankcrimes and on 12″ vinyl via Hells Headbangers. Channeling the spirits of Venom, Hellhammer, Motörhead and Discharge, the EP features five filthy numbers of confrontational Kill ‘Em All angst and enough vocal venom to level a nation. Said Last Rites of the offering, “This nasty little beast is a crust-a-licious demo-nic hybrid of ugly gutter thrash with a vicious punk spirit and a dose of injected blackness. Jump back thirty years to an uncomfortable-yet-awesome three-way between Cronos, Lemmy, and Tom Warrior (or, whatever, Satanic Slaughter) – then BOOM, BAT! A close 21st-century equivalent would be Midnight, only with less sleazy Satanic debauchery and more of an all-encompassing generalized rebelliousness.”

The Primitive Age EP is available digitally at the official BAT BandCamp page HERE and on cassette via Tankcrimes HERE (where you’ll also find additional merch). You can also nab a copy of BAT’s recently issued “Cruel Discipline” seven-inch out on Hells Headbangers HERE as well as the 12″ version of Primitive Age.