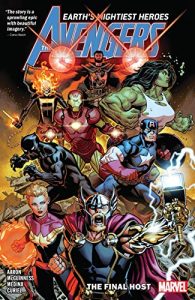 Loki. Just like all roads once led to Rome, most of the mischief in the Marvel Univese can be traced back to the adopted son of Odin; which is appropriate given that he’s God of, well, Mischief. Sometimes though, in his quest to fulfil whatever twisted ambition or idea of revenge it is that has set him on the path that he’s decided to follow on whichever day it is that he’s woken up on the wrong side of the Asgardian bed,  he goes too far. And in The Final Host Loki goes too far. Much too far. Having just decided to put the band back together, Steve Rogers and Thor and a rag tag bunch of heroes including Black Panther, She Hulk, Captain Marvel, Doctor Strange, Ghost Rider and the recently returned from the good as dead, Tony Stark forced together by fate, find themselves battling a world ending threat that has, as far as they’re concerned, appeared from out of nowhere. Appearances can be deceptive though, and this threat has been lying dormant since the dawn of life of Earth and in a third rock from the Sun shattering adventure that reveals long hidden, and dormant,  secrets and enemies, the Avengers step back into the breach and do what they do best. They save the world.

It’s a new dawn and a new day in Marvelville, which of course means it’s time for a new iteration of the Avengers and the scribe now in charge of plotting their collective destiny is the one and only Jason Aaron. Backed by the always dependable, and always beautiful to behold art of Pichelli, McGuinness and Medina, Aaron’s initial foray into the realm of the world’s premiere super team is an absolute blast from beginning to end. Expanding exponentially on the mythology and history of the team, superheroes, life, the Universe and everything, he hands the Avengers an almost impossible mission that pushes them to the limits of their abilities, lays bare their souls and sets them on course for what promises to be a thrill a minute, adrenaline packed ride on his watch.  Aaron goes big right out of the gate and in doing so blows apart the idea of what big really is, redefining it by pitting the Avengers against their biggest foe(s) yet. Advancing and incorporating some genuinely intriguing, and massive, concepts into his opening salvo, that thanks to his trio of artistic colleagues looks every bit as good as it reads, Jason Aaron hits hard and fast with The Final Host sets one heck of a benchmark, one that it’s going to be incredibly difficult to follow. Or it would be for anyone else. But this is Jason Aaron, and he’s just getting started.  Welcome to the future… Tim Cundle