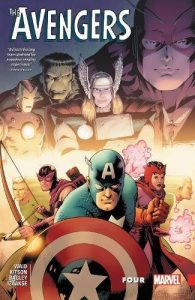 The idea that ‘fame is fleeting’ or a temporary state of being is a misnomer that those of us who have never felt it’s embrace comfort ourselves with when an endless stream of vacuous non entities are constantly beamed on to our television screens by channels desperately using the young, stupid and good looking in an attempt to bolster their constantly failing ratings. And although this is the case for the most part and as far as most people are concerned, when it comes to the world’s premier superhero team, the Avengers, nothing could be further from the truth. They climbed to the top of the comic mountain half a century ago and have remained there, or at a base camp just below its peak, ever since and as such their history has pretty well documented, explored and charted with nary a gap or moment not accounted for. Until now that is.

Four is the story of the brief interlude in the Avengers timeline when the original team stood down and stewardship of a new squad of heroes (Quicksilver, the Scarlet Witch and Hawkeye), all reformed villains looking to redeem themselves, was handed to the recently revived Captain America.  It’s the tale of their first weeks together, when they were thrown in at the deep end of the ocean and their sink or swim trial by public and media began in earnest. Pitting them against each other and a sheep in wolves clothing preying on them from inside their ranks, Four is the opening chapter in the story one of the greatest line-ups of the Avengers and how it almost fell apart before it even really had a chance to get started.

Slick, clever, fast and incredibly well plotted and written, Four is a magnificent ode to the latter years of the silver age of comics. The dialogue, characterisation and pacing all feel period specific, but are turbo charged to ensure that they also appeal to a twenty first century audience, and writer Mark Waid’s astonishing attention to detail in every aspect of the story is matched only by the superb art of Kitson, Bagley, Izzakse and Stein. The disharmony and disfunction that plagues the earliest moments of the team and the friction between Hawkeye and Cap is a genuine joy to read, as it humanises the characters and allows you, for a change, to see them as people rather than central pillars of the Marvel Universe.  Furiously paced and gorgeous to behold, Four is a history lesson that no self-respecting fanboy or girl of the Avengers can afford to be without.  Avengers… To the comic book store! Tim Cundle