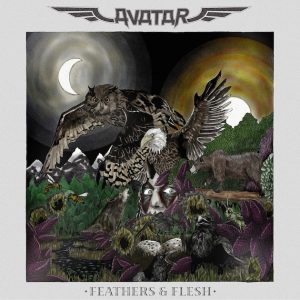 Feathers & Flesh is more than just the new album from Avatar, it’s a concept album and also a huge leap forward for the band. The artistic evolution from Hail the Apocalypse to F & F is huge, proving that Avatar aren’t just a metal band, they’re creative giants. There are no stand out moments or songs on this album. Every track, every band member, is amazing and it’s this chemistry that creates the transcendental experience this music will give the listener. I believe it’s possible this album will alienate a few Avatards (Avatar’s name for their fans) I also believe that they will gain many new fans as this album gets out there to the masses. There are many classic Avatar moments on here but the things they do that we’ve never heard from them before, the places they go…well, it’s easy to sum up by saying that most bands take two or more albums to move forward this much and yet Avatar has done it in a single album and without releasing any dud albums in between. I can’t wait to listen to Feathers & Flesh a hundred more times this year. Jim Dodge