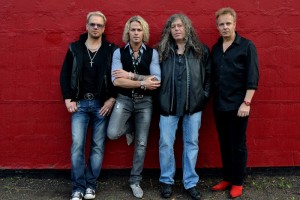 With a new album that goes louder than 10… vocalist Mikael Erlandsson of Last Autumn’s Dream gave us an insight to the process of it’s creation.
Words: Mark Freebase

With your time in the music ‘biz’ Mikael, how would you say the world of melodic rock has gone?
MIKAEL: Hard to say these days, but I think good music will always stay in our hearts. The rock scene today shows off many millions of bands (like ours) and that proves the rock scene ain’t dead. The world needs more melodic tunes, not just a cool product. I mean, to be honest, there’s not so many good artists/bands/songs topping the charts today … and that can perform live as well …
melodic rock will always have a place in every decade, and it will keep on going for a looooooooooooong (vibrato) time to come.

What changes have made a great impact?
MIKAEL: The streaming through the Internet of all the bands and artists music for free definitely. Downloading has made all the music much easier to find for everyone, but on the other hand there’s no money for the writers doing this music now. I think this is a big issue these days. For the unknown bands it’s perfect, but for the main big artists it’s not so good. Yet, I don’t think some really care, just because they are touring anyway… So I would say – the Internet!!!

So with ‘Level Eleven’ have you stuck to a tested formula you feel comfortable with, or does it contain some different angles for you?
MIKAEL: I am very comfortable with our sound and songs, and of course you can say that we always sounds the same as the previous albums from that. But the songs are written in the same way as always and we are using the same instruments and studios…. The only new change in these songs are that we all are much wiser and grown-up and just want to come out and play these songs for an audience now. That’s why there’s a harder edge on this album. You can still hear the familiar LAD-sound though 😉

Quite a few of the song titles involve love as a topical point, is that a common factor for this style of music?
MIKAEL: Yes, naturally!! That’s because we’re just a couple of lovely boys 🙂 Well, love is still the answer to everything in my opinion. If we find love, we all find peace. Easy and simple…
I think of all the songs done, and 98% of them are singing ´bout love really. We will keeping this formula going on for a while, further on..

With several line-up changes, how has that affected or developed the band’s career?
MIKAEL: True. This was a “project” from the beginning, especially with the “Europe-guys” and Andy involved. But when Mic, Ian and John had to leave when it was decided that “Europe” should get together again in 2004, I think we started over again and it’s much more of a band. We started again with Jamie and Marcel plus also Thomas Lassar… Thomas left after 1 album, but we kept on for a couple of albums with that main line-up; Me, Andy, Marcel and Jamie.
Marcel then passed away tragically, and Naley became the new bass player. Those were hard times I must say; that was all followed by having to let Andy take a couple of years time-out because of illness, but we’re still pressing on, and I’m really encouraged by that. These days, the line-up is; Me, Jamie, Naley and Petar Söderström on guitar, and we’re all from Sweden. From now on you can count on that we are developing in a huge way to do live performances, as a band – Finally!!!

So what makes a really good song?
MIKAEL: Oh, If I knew the answer to that and had the answer, I would have been a millionaire…!
For me a good song takes you on a journey in your own mind. It can be hard, soft, silly and beautiful as long as the listener enjoys it. That’s a good song. 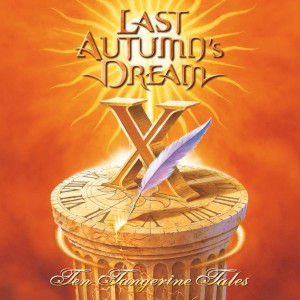 How do you personally go about creating that then?
MIKAEL: I create my songs in my head. No guitars or keyboards – I just use my mobile and record my ideas. Sometimes when I’m in the shower or sleeping or just.., anywhere really…… It keeps coming all the time. Then I do the recordings and arrangements in my own studio at home, alone of course. I’ve done tons of bad, very baaaaaad (vibrato) songs during this time – luckily not for your ears to hear – but also some really great one’s as well [laughs].

It is acceptable for rockers to be older now. You don’t have to be twenty or younger. Do you think that with age a quality and good vintage evolve in music?
MIKAEL: Ohhhh, tricky question! 😉 What can I say? Ask me again when I’m 67 years old and have released LAD’s 27th album or something….
I think it’s OK to do this as long as you enjoy it, but it would be nice if someone tells you when it’s time to step off the stage; you know, if it gets a little bit strange.
Old timers are much more gentlemen and have soooooo much more to say than youngsters, but that said, many of the new and young bands are brilliant too, so therefore I have to say that age doesn’t really matter as long as you rock!!

What can you tell us about the album title?
MIKAEL: “Level Eleven”!! “This goes to eleven..” Of course, this line is from the movie “Spinal Tap”. Such a funny and brilliant movie with unforgettable one-liners. See it if you haven’t, it’s a MUST-SEE!!!!

How did the idea for the album artwork come about?
MIKAEL: This art work is by Mr Eric Phillippe. He has done every LAD cover from the very beginning, and this is his idea. We like it a lot, with the knob and everything… [laughs]

Can you tell us how you would sum up the band’s sound, especially to those who may not of heard of Last Autumn’s Dream?
MIKAEL: Hmmmm, let’s see … Take a little ELO and a little of Enuff Z Nuff; put some hard drums with slick guitars and a guy who sings like a husky pop-wannabe, all crying the songs of love and a little of Beethoven and – Voila!! There you have it!!

Nice… so what bands or albums would you like to see yourselves compared alongside?
MIKAEL: In the future; Muse, ELO and Rainbow´s album “Down To Earth”. That would be very nice thank you.

‘Level Eleven’ is out now on AOR Heaven Records