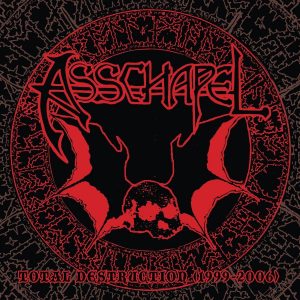 Nashville, Tennessee has a long and rich musical heritage, but away from the rhinestone and slide guitars of the country world, another force grew in the underbelly of the city, hellbent on musical destruction. Asschapel banged out an almighty blend of thrash and crust, taking influences from the likes of His Hero Is Gone but really establishingtheir own sound. Throughout their existence they released a handful of records and brought their colossal sound to stages across the word. I was lucky enough to see them in Berlin as well as visit them in Nashville one time, and I really immersed myself in their sound. This collection opens with their final album “Fire & Destruction” and it is their crowning glory, blessed with a powerful production that captures their crust-meets-Swedish metal attack. There are plenty of touches on here that set Asschapel ahead of the crowd but for me it is the combination of massive riffs, head-banging thrash and those clever guitar touches all over the places that add an outer-worldly mood along the lines of Neurosis or Voivod. This album also compiles the Total Worship, Rotting The Body and Satanation records which reveal a rawer and slightly more experimental style. A beautiful noise. Tom Chapman