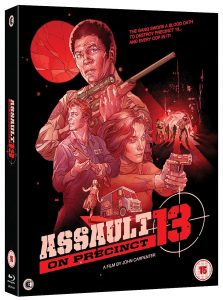 Assault on Precinct 13 is the cult movie John Carpenter made on a shoestring budget just prior to his phenomenal hit Halloween – very much a film from a young director cutting his teeth and flexing his muscles in the industry. You can see foreshadowing here for many future films, from The Thing and Escape from New York, to Prince of Darkness and They Live – not just in terms of a directorial style but also with regards to themes and obsessions.

As the film opens we see members of a local LA gang called Street Thunder being cornered and killed by the police. The gang’s top dogs, having recently come into possession of a bunch of assault rifles and pistols, swear to get their revenge – not only on the authorities, it seems, but on the neighbourhood in general. Enter newly promoted Lt Ethan Bishop (Austin Stoker), who’s in a rush to make a name for himself and is more than a little crestfallen when he’s given an assignment to oversee the final stages of decommissioning the Anderson police precinct. Never has the phrase ‘be careful what you wish for’ been so apt, though.

Because at the same time, a handful of prisoners – including the notorious Napoleon Wilson (Darwin Joston) – are being transported to Death Row on a bus when one of their number becomes sick. They have to stop off at the nearest precinct, which – you guessed it –just happens to be the understaffed Anderson. Now, after causing mayhem on the streets, the Street Thunder gang chase their latest victim to the precinct – and suddenly cops, prisoners and officer workers alike find themselves under siege. With the phone lines down and power off, they must all fight to survive the night against insurmountable odds.

Not only does Assault on Precinct 13 hint at future Carpenter glories, it also reveals some of the director’s influences at that time – in particular a love of westerns such as Rio Bravo and The Alamo, plus horror films like Romero’s The Night of the Living Dead. In addition, it’s an excellent blend of suspense thriller – which is not afraid to move at its own pace, taking risks – in the first half, and high-octane action movie in the second. The rest of the cast, which consists of the likes of Tony Burton as convict Wells (later known for his role as Apollo Creed’s coach in the Rocky series), a feisty Laurie Zimmer as Leigh and Nancy Loomis (who would go on to become a Carpenter regular) as Julie, provide not only solid support but display quite a range with their characterisation.

Included here are a whole host of extras, such as a trailer and radio spots, audio commentaries by Carpenter himself and art director and long-time collaborator Tommy Lee Wallace, new interviews with Wallace, Stoker and producer Joseph Kaufman, a candid live interview with Carpenter and Stoker conducted at the Egyptian Theatre in Hollywood in 2002 (Carpenter: “The script came together fast…some might say too fast!”), an interview with Loomis ‘The Sassy One’ about her association with John through to films like Halloween and The Fog, plus blu-ray exclusives like the ‘Do You Remember Laurie Zimmer?’ documentary, and – perhaps of greatest interest to Carpenter fans – an early black & white student film called Captain Voyeur, which seems to lay the groundwork for what would come with a mask-wearing Michael Myers in Haddonfield. All this and bonus CD soundtrack (Carpenter was of course responsible for the music as well, just like in a lot of his motion pictures) and five art cards as an exclusive for the limited edition box set. 13 is about to become your lucky number – highly recommended!   Paul Kane