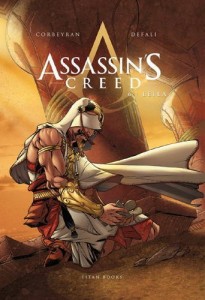 The sixth hard back comic to be released by Titan Books sees the grand finale to Assassin’s Creed’s Egyptian Saga. In 14th century Egypt, the seasoned Assassin El Cakr seeks to return the mysterious Scepter of Aset to the Brotherhood… when it is stolen by a mysterious woman named Leila. Seven centuries later, El Cakr’s descendant Jonathan Hawk desperately tries to get his hands on the relic – leading to an ultimate showdown between the Assassins and the Templars.

As an age old comic book fanatic, I found myself easily emerged in the pages of this latest edition. The precision of Defali’s ink strokes helped to perfectly set the tone of the comic. Coupled with Vincent’s colours and Corbeyryan’s writing, the story lifts itself from the pages and easily embeds into your conscience. From well executed and subtle action sequences moving from panel to panel to beautifully rendered landscapes and skylines, Defali and Vincent’s combined talents help to capture a recognisable feel of past and present. With rich, warm, desert tones and architecture in Egypt to gentler pastoral shades in a more clinical present day. From the second page, Corbeyryan embarks you on a thriller encompassing action and treachery throughout with more backstabbing and double crossing than you can handle. Coming in at 48 pages, the story moves at a rapid pace jumping from the Assassins to the Templars as well as shifting back and forth in time in a desperate race to become the victor. A great addition to the series… Drew Hamley