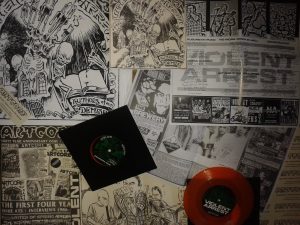 When I first started going to shows, buying records and reading zines, there were four publications that meant the world to me: Maximum Rock’N’Roll, Flipside, Suburban Voice and Artcore. In the twenty-eight years or so since I first became a devotee of all four, both Flipside and Suburban Voice have gone the way of the Dodo and without Tim Yohannon at the helm and George Tabb’s columns, MRR has become more of a chore than a joy to spend any time with, which just leaves Artcore. And while other zines (Reflections, In Effect, Fracture, Mad Monks, Scanner Real OD, No Barcodes Necessary and many, many more) have entered and left my life since I first stumbled across Artcore (in, I think, Autonomy Records), none of them have had the same kind of impact or left the same impression on me as the last surviving member of the original quartet. It is, without a shadow of a doubt, the best UK zine there ever was, is and will be. And yeah, you can quote me on that.

As a way of celebrating the thirtieth anniversary of the first issue appearing, Welly (that’s Mr Welly to you) the editor, publisher, reviewer and all round general dogsbody without whom this publication wouldn’t exist, decided to reprint the interviews from his earliest issues as a way of sharing the vast history of the zine and providing a snapshot of a time when everyone involved in the scene thought that we could make a difference. I have to admit, when I sat down to read #35, a flood of memories came surging back, as it includes the interviews (Spermbirds, C.O.C., Cowboy Killers and Life Cycle) from the first issue (#6) that I read. Most of the interviews are, as Welly would be the first to admit, pretty basic as far format is concerned, as he was just finding his feet in the murky world of zines when they were first published, and fuck knows, it was difficult enough just being a teenage punk in the eighties without adding the stress of putting a zine together into the mix.  That said, it wasn’t the the questions that were important back then, it was the energy and urgency that mattered, the need to spread the word about great bands and great records and being able to reach out and make some sort of connection with people in the scene.  As a portrait of a much missed, bygone era of the Hardcore and punk scenes, this issue (much like Artcore still is) is invaluable, whether you were there or not, and while the vast majority of the bands featured have faded into punk rock obscurity, thanks to Artcore their names and their brief moments of fury, passion and creativity live on.  Its Punk Rock History 101 folks and it’s the best damn course on any musical curriculum. 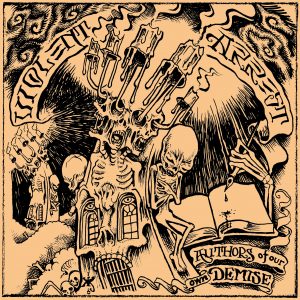 While most folks would be content to just release the issue and rest on their laurels, that’s never been Welly’s way; and as such, and to make the whole package just that little bit more enticing, Artcore #35 comes with complete with the new EP, Authors of Our Own Demise, from one of the UK’s best current HC bands, Violent Arrest. Okay, yeah, Welly sings for ‘em, but it doesn’t change the fact that it’s a raging slab of six finely tuned, late(ish) eighties HC flavoured shots of almost pure adrenaline. Think latter period Ripcord and you won’t go far wrong.  Oh, and the packaging? That’s something else as well. Featuring artwork by Brian Walsby and Vinse Rancid, it’s been put together with the kind of care and attention that theoretical physicists devote to proving that String Theory is actually a thing in the physical world and not just the ramblings of some half crazed would-be interdimensional traveller. And you know what? You can get both the EP and Artcore #35 for just six quid. Six quid. What else can you get for six quid? A couple of pints in Wetherspoons providing you can bear to drink in the same place as their toothless, narrow minded, bigoted “valued customer demographic” or a packet of cigarettes maybe? Hell, it won’t even get you into most shows, so take my advice and invest your money wisely. Buy Artcore. It’ll probably be the best six quid you’ll ever spend…  Tim Cundle