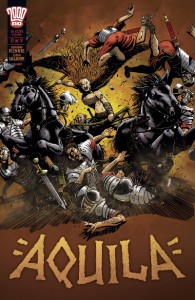 Aquila #2 – Gordon Rennie & Leigh Gallagher (2000AD)
Another in a long line of attempts by the house of Tharg to break the US market, which will probably end up in the same pearls-before-swine dustbin as previous attempts. Perhaps if they tried a different tactic other than second rate US  versions of Dredd accompanying poorly-performing because-they-can’t-get-it-right Dredd movies accompanied by a seemingly random and half arsed series of reprints it might work? Anyway, I couldn’t give a toss. After having pretty much  everything I’ve loved since I was knee high to a sloth repackaged in shiny real-live CG  action and being adored by the noob  masses in their  giddily enthusiastic millions; I TOLD YOU SO  doesn’t have the same sheen to me it once did. And so it’s nice to have something truly cool, and truly unique to myself and a select glorious few who know where the action is really at.
In this case, the action’s in US  size reprinting of gloriously curmudgeonly script droid Gordon Rennie’s Aquial, which I have previously mentioned seems to be a reworking of 2000AD’s 1970s Blackhawk character for those of you foolish enough not to pay attention to every SINGLE word I say.

Building nicely on the foundations set in the first issue, the feel of the story has gravitas about it , aside from the historical context in which the story is set , the tone and the characters are imbued with a certain weight, I am reminded of George GRRRRRRRRRRRRRRRRR Martin’s obscure fantasy novellas, which you probably have never heard of, but suffice to say this is no small compliment. There is also a similar feel of bloody, merciless historical authenticity tempered with a smattering of more fantastical genre elements. In issue 2 Aquila learns more of his position as soul-reaper for his Demonic mistress, and that he is far from unique. There is strong foreshadowing of what lies ahead for the former gladiator, and a sense of epic scale to come. Hopefully Gordo and Leigh Gallagheer will stick together for many a year to tell all the episodes of this grim saga, which, Gods willing, I will most certainly be devouring like they were succulent human souls. Don Doomcock