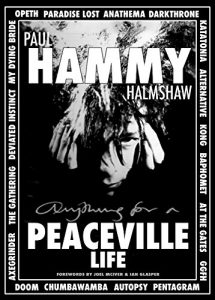 Everybody is the hero in their own story and everybody has a story to tell. Granted, some are far more entertaining than others and Hammy, as he’s known to most folks, has a doozy of a story to share with anyone and everyone with the slightest interest in the underground – and to a certain degree, more mainstream – punk and metal scenes. Growing up with the burgeoning punk rock scene and having a healthy disrespect for the system and authority, it was only natural that the author would gravitate to playing in bands and setting up, running and actually making a living (which for many of us, was always seen as being the impossible dream) from – in the beginning at least- a DIY record label. But he did it, and (Anything for a) Peaceville Life is the warts and all story of how he did it and emerged relatively unscathed at the other end to tell the tale.

My initial exposure to the UKHC scene coincided with Hammy making the transition from a purely underground, cassette based endeavour to vinyl.  And while his journey begins far earlier, detailed here in highly entertaining, and at times laugh out loud funny (most notably his experiments with ‘homebrew’) fashion, Hammy’s experiences, and story, reveal just how difficult but ultimately, rewarding it was to rigidly adhere to the ‘Do It Yourself’ ethic that rejected, and rejects, the accepted philosophies of the music business.  It was, and is, a more all-encompassing, inclusive approach in which there were, and are, no rules governing how things should be done and one in which you just sort of muddle through and learn how to do everything on the fly or by watching others do it and adopting what’s successful and rejecting what isn’t.  As I mentioned earlier, our paths first crossed when I ordered the first three 7” releases from Peaceville, beginning with the “Will Evil Win” flexi (which also introduced me to Gizz Butt and began my life-long obsession with The Desecrators, Wardance and the English Dogs) and culminating in the Atavistic 7” and it was also around this time that I did a postal interview with Hammy for a local, long done and dusted fanzine. While Hammy almost certainly doesn’t remember that (and there’s no reason that he should), he does convey how exciting and overwhelming it was to be a part of the scene back then, and how engrossed everyone involved became in UKHC .  The history of Hammy’s first real love, his label, is laid bare in this brutally honest book; the highs (and there are many highs, although they’re not of the variety that you might expect) and lows, good times and bad, ups and downs, they’re all here.  It’s a weird, wonderful and at times, astonishing adventure in the the beguiling, beautiful and equally awful world of the music industry.

In most biographies, the authors focus on their own “version” of the truth, which while being mostly accurate, can be one skewed and one sided and as such, don’t portray events as they “really” happened, but as the author remembers them happening.  That isn’t the case in Peaceville Life, as Hammy ensures that the voices and opinions of as the bands and people involved in Peaceville’s history are also heard and includes their sometimes unflattering accounts of what transpired alongside his own, adding a rawness to the authenticity of the story which is indicative not only of the fair and equitable way in which he ran the label, but also helps to flesh out, and paint a picture of the man who was ultimately responsible for it. One of the things that you learn as you get older, is that things rarely, if ever, end well and while incredibly successful, Hammy and Peaceville didn’t get their happily ever after. He and his wife( and partner in the label) Lisa, ended up leaving their creation somewhat acrimoniously after two decades of shaping and forging its destiny; and there is a distinct feeling, especially in the latter half of the book, that he was happiest when Peaceville was a labour of love, putting out records recorded on a shoestring budget by bands who he signed with a loose contract scrawled on a single side of A4, rather than the cutting edge and fully fledged business sitting at the forefront of innovative metal with real offices and full time staff that it eventually became. That said, it’s an engaging and entertaining story, told by a gifted raconteur, of a far simpler (and arguably, much more fun) period in punk rocks history and how the music business inevitably ends up corrupting and souring everything that it touches.  If you ever soaped your stamps and knew how to send coins through the mail without postie knowing what he was carrying and nipping off to the pub with the contents of your letter, it’s pretty much essential and for those that didn’t and don’t, (although as you’re reading this, I’d be willing to bet that you both did and do) Peaceville Life is still a great way to while away an afternoon or two…  Tim Cundle