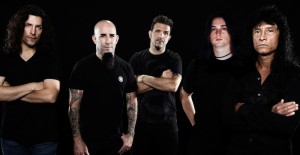 Thrash legends ANTHRAX are set to release their new album For All Kings this Friday, Feb 26th. In anticipation of the release, the band reveal what it was like working and recording with their latest addition, lead guitarist Jon Donais

The lyric video for the first new track from the record, Evil Twin shows a barrage of places, victims, actions and some of the infamous zealots who have perpetrated violent extremism on innocents around the world, aptly exemplifying the song’s powerful message.

“He’s become an integral part of our process, that’s for sure”, comments Scott Ian. “It’s cliche, but he really has become a sixth member.”