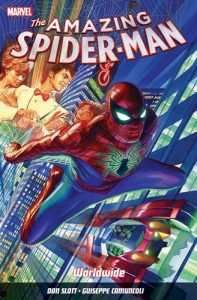 “Spider-Man, Spider-Man, corporate, global Spider-Man…” It doesn’t have the same catchy appeal as the friendly, neighbourhood original does it? However, while the song doesn’t remain the same and loses a little of its soul in its suit and tie executive make-over, Worldwide doesn’t miss a beat, lose a step or put a foot wrong from beginning to end. Sure, Pete’s life may have changed beyond all recognition now that he’s the head of a major, multi-national company, but he’s still Spidey, and in the wall-crawlers world, the more things change, the more they stay the same. He’s still caught up in an endless web (groan, the puns, they just get worse) of battling super-villains and trying to juggle his personal and professional lives, but now he has to do it on a much grander scale. Because with greater power comes greater responsibility and now his secret identity is nearly as rich and powerful as that other incredibly famous and entirely fictitious entity, God. But he’s still nowhere near as wealthy or influential as Tony Stark, a fact that doesn’t go unnoticed in, and is referred to throughout, Worldwide; and Spider-Man acting as Peter Parker’s body-guard not only helps to reinforce it, but also serves as touching ode to the “Golden Age” of Iron Man and Marvel.

Dan Slott’s latest Spidey arc hits the ground running in the first panel and doesn’t pause for breath until the last frame of the final page.  It’s a high velocity, rapid fire tale of corporate espionage, sabotage and double dealing in which Spidey teams with S.H.I.E.L.D. to bring down and destroy Zodiac, an international cabal of ne’er-do-wells and criminals waging an information and cyber war against Parker Industries.  Featuring more sub-plots and arcs than any book should ever have a right to, including the return of Doctor Octopus, a heavily disguised “Norman Osbourne”, the formation of what could well be a new Sinister Six and a final reveal that you won’t see coming but leaves you desperate to know more, Worldwide is an engrossing tale that you’ll end up nearly losing yourself in and will return to time and time again just to make sure you didn’t miss anything.  The characterisation is exquisite, with Pete’s new position subtly changing who he is and how he views both his and Spider-Man’s roles, yet at the same time he still retains the fundamental core of who he is, exemplified by his interaction with both Aunt May and the Human Torch. The artwork is magical, Camuncoli capturing the intensity and fury of the action and the more delicate and emotional moments of the story with a sure and steady confidence that pours from every detail, on every page. It’s the same old Spidey that we know and love, but now his problems are bigger, there’s a lot more to play for and a lot more at stake. It’s a new dawn, it’s a new day and it feels good… Tim Mass Movement