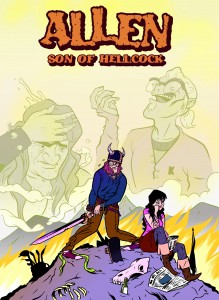 What do you do when you’re the son of the greatest warrior ever? There’s always the family business of heroing (is that even a word?) or treasure hunting. For Allen, the son of the dead hero of tall tales, his destiny involves slaving away at, literally and figuratively, a cart repair shop while working on a graphic novel of the life he wishes he had while battling depression and being dateless.

Oh, and to make Allen’s life more complete than it already is, his dad, Hellcock, haunts him and complains that for the most part his life is pretty much useless while floating around in a loincloth in a less than a flattering physical form.

Written by former editor in chief for The Onion Will Tracy and Gabe Koplowitz, Allen is about to be put through the wringer, and I’m guessing from the tone of this debut, in future issues will be humiliated so badly that the audience can’t help but fee for him, by his erstwhile creators. The art by Miguel Porto is simplistic in its style, while retro at the same time, giving the book a very unique look, one you wouldn’t expect from a story involving magic, monsters, and heroes. While the first issue is fun, the true test of this series is yet to come, primarily how the characters evolve and if said evolution keeps the readers involved in, and caring about, Allen and his life. Part of this, I’m sure, will come from Kaarl (yes, that is spelled correctly) the son of Hellcock’s nemesis who has no lack of confidence but is spoiled, not too smart and desperate to get out and top what his father achieved (even if it will destabilize the whole country which is at peace under his rule.). Here’s hoping that it becomes one of the great comic book rivalries, and on the strength of this first issue, I think it might… Jason Bonton