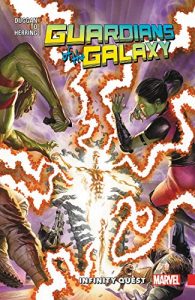 In Infinity Quest, the Guardians dysfunctional search for the Infinity Stones kicks into high gear, as they join the revamped Nova Corps in an effort to purge it of corruption and set it back on the path of law and order. Yeah, you read that right. The Nova Corps asked the Guardians to become their moral compass and to root out and squash the festering malignancy lurking at its heart that’s causing the Corps to rot from the inside out.  I know, it’s a bit like asking a team of career bank robbers to guard a high security vault, but as Callimachus famously said, sometimes it takes a thief to catch a thief. And in this case, it seems like old Callimachus was right on the money, as Rocket, Drax, Starlord, Groot and Gamora, with a little help from an old friend, get stuck in and do their utmost to turn the new breed of Nova’s from a ragtag bunch of ne’er do wells and second rate pirates into a fully, honed, fierce fighting force whose devotion to the corps is equally balanced with their various side-lines in petty larceny.

Buckle up kids, because Duggan, To and Kuder pack as much as they possibly can into Infinity Quest, and it’s white knuckle, bucking space bronco of a story that dares you to try and keep up with the multitude of events, changes and arcs that unfold in its pages.  Loss, betrayal, action and adventure are the order of the day as the Nova’s face their would be nemeses and the Guardians scramble over a major hurdle in their mission to locate the Infinity Stones and find out why Groot is having growth issues while fulfilling, in true Guardians fashion, the job they were hired to do by their latest employers.  It’s a maelstrom of space battles, treachery and double cross in which staunch allies depart for pastures new and old faces return to the fold, as the Guardians desperately try to find a way to work together, overcome their differences and do what they need to do in order to do what they do best.

Marcus To, with a little help from Arron Kuder in the closing chapter, keeps things sharp, detailed and precise throughout, and stylistically imbues Infinity Quest with an eighties retro feel that helps proceedings to zip along at an alarming, but incredibly satisfying rate.  And entrusting the fate of the Guardians to Gerry Duggan was one of the best decisions Marvel has made in the last couple of years, as he’s a master of plotting, planning, characterisation and dialogue and brings his A-game to each and every issue of Guardians. Duggan and To are one of those dream partnerships, a perfect symbiosis of creators working in harmony to consistently deliver one of the better books in the current Marvel library. Yeah, it really is that good. Don’t believe me?  Then grab a copy of Infinity Quest and you, just like everyone else who reads it, will become a die-hard Guardians fan and true believer.  As Stan would say, Excelsior… Tim Cundle