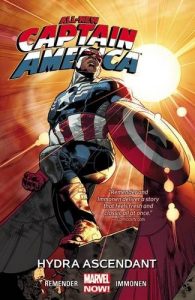 Change may very well be inevitable, but it doesn’t mean that I have to like it. At least, that was how I felt when Steve Rogers was once again forced to relinquish the shield and step down as Captain America following the Iron Nail saga. The only ray of sunshine that I could see in the aftermath of that incident was that, this time at least he wasn’t “dead”. The super-soldier serum within him was nullified, transforming him into what he really was, a nearly ninety year old man. However, the world needs Captain America, and as Steve could longer be Cap, the mantle was assumed by Sam Wilson, more commonly known as the Falcon, Roger’s best friend and former sidekick. And All-New Captain America is Sam’s first taste of what it’s like to take the fight to the bad guys as Captain America.

If I’m totally honest, part of me didn’t want to like Hydra Ascendant, because part of me has always, and will always, believe that there’s only one Captain America, and that’s Steve Rogers.  Sam though, thanks to the always on form, long-time Cap scribe Rick Remender made a believer out of me by the end of the first of the six issues collected in this book. The plot is, on the surface at least, relatively straight forward, with Sam, sorry Captain America, attempting to thwart Hydra (led by a myriad of established Cap enemies) launching a secret weapon that could spell for the end of humanity within two generations. Teaming Cap with the new Nomad (Ian Rogers, Steve’s son from Dimension Z) and Misty Knight, it’s a furiously paced, action packed tale that deftly balances the incredibly powerful personal story of Sam coming to terms with his new role with a full throttle, everything turned up to eleven race against time, edge of your seat thriller that’s got more than its fair share of twists and swerves and also delivers a super-sized dose of uber-violence. There’s a few delicious pop culture in jokes and “moments” (Agent Bob Dobalina anyone?) that help round out the thoughtful and intelligent story, and the characterisation (especially the abrasive relationship that exists between Cap and Nomad) and dialogue are, as you’d expect from a Remender tale, superb. As is Stuart Immonen’s eye popping, wonderfully detailed and intricate artwork. There’s a new Captain on deck and his name’s Wilson, Sam Wilson. And he’s made a believer out of me…  Tim Mass Movement