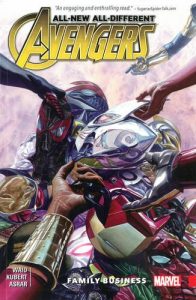 I guess that much in the way that soldiers, police and fire officers who train, break bread and serve together become family, superheroes must come to view the members of their team in the same way.  It may seem strange, but until I made the connection via the title, Family Business, of this second volume of All-New, All-Different Avengers, it had never occurred to me that the Avengers, X-Men, Champions or the Defenders saw themselves that way. The Fantastic Four, yes, because three quraters of them were related by blood or marriage, but the other teams in the Marvel Universe, I didn’t even consider that they might think of their teams as being family. Not even for a second.  I always just thought of them as a loose confederation of heroes who gathered together out of expediency and as a way of maximising their powers, and thus helping to ensure victory, on the battle.  When that idea did form, it was a moment of illumination, one whose light once switched on, refused to turn off and grew brighter the more of Family Business that I read. And just like every family in the real world, Mark Waid’s All-New, All-Different Avengers argue, bicker and don’t always exactly get on, but when push comes to shove and its crunch time, they close ranks, put on a united front and meet their troubles head on, together.

Family Business begins in the middle of the Standoff storyline and plunges Iron Man and Captain America’s new team into the thick of the action as S.H.I.E.L.D.’s dirtiest little secret becomes public and its streets run red with the blood of anyone unfortunate enough to reside there. It then moves quickly on, introducing the new Wasp to all and sundry in a feel-good, old-school story that spills over into the next tale, sends a long-time serving Avenger down a different path and firmly establishes her place in four colour canon. Which brings us to the main arc of this book, the one in which the title takes on multiple meanings as Nova and his team mates go in search of his long lost, and previously believed deceased, father. Their quest takes them to a planet held hostage by an old adversary trying to escape from another realm, and attempting to defeat him takes everything that the team have, but as they face their greatest challenge, it strengthens their bond and reinforces the idea that they really are a family.  You know that adage, “You can choose your friends but you can’t choose your family’? That describes the team perfectly. They may not be each other’s first, second or even third choice of companion to hang out with, but out in the field where they do what they do best, they’d readily die for each other. Waid’s snappy script and punchy dialogue is backed up magnificently by the multiple artists working on the title, each bringing their own style to the book and completely and utterly capturing the essence of the stories being told. Around about now, I’d usually try and throw some well used catch phrase into proceedings, you know something like ‘Excelsior’ or ‘Avengers Assemble’, but with a book as good as this, I don’t think I need to, do you? Good, then we’re agreed. Just read Family Business. You won’t be disappointed. I still can’t believe that I didn’t get that whole family connection thing until now… Tim Cundle