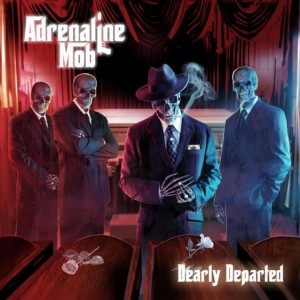 Adrenaline Mob – Dearly Departed (Century Media)
Diehard fans of the band will lap up this E.P. It’s a collection of new cover tunes, and acoustic versions from the two previous albums; plus an unreleased song from the ‘Men Of Honor’ sessions. More of a stopgap release you could say, whilst the band experienced some unfortunate setbacks. The nine songs on offer here ooze with well-executed American heavy rock. A.J Pero (Twisted Sister) still firmly fills the drum stool for the departed Mr Portnoy, and adds a dash of dirt to the technicality whilst bassist John Moyer (Disturbed) has left the fold to be replaced by Erik Leonhardt. Its business as usual though for Adrenaline Mob… melodies, rockin’ guitars and some charismatic vocals, making for a pretty darn fine compilation of tunes, all served up in a very recognisable United States collaboration. Spicing up the cover tunes rather than straight cut replays/feel does tend to drive away the question “is this all really necessary”. Bottom line is, Adrenaline Mob are a rock band you should take notice of! Mark Freebase