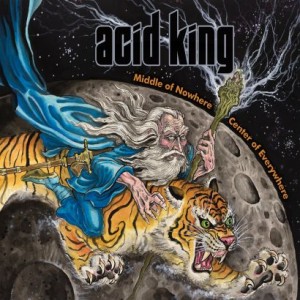 Acid King – Middle of Nowhere, Center of Everywhere CD/2 xLP Album (Svart Records)
The San Francisco trio return after a 10 year absence (yes 10 years – I couldn’t believe it either) with 8 tracks of sprawling, Kool Aid Acid drenched stoner rock. Full of spacey guitars weaving in and out the sludgy, hypnotic drum and bass segments, topped off by Lori’s plaintive wailing. Ten years and like all good trips it only feels like a few seconds since the band released ‘III’ on Small Stone Records and despite a few personnel changes the band have lost none of their thick sound or their psychedelic underpinnings. In as much as a record can be mind-altering, ‘Middle of Nowhere, Center of Everywhere’ is a real trip. So are you on the bus or off the bus? Ian Pickens