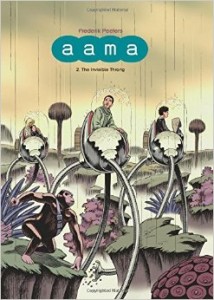 Aama 2. The Invisible Throng – Frederik Peters (Self Made Hero)
Part 2 of the science fiction saga finds the central characters, the troubled Verloc, his brother and a group of scientists on the desert planet of Ona(j); having been tasked with investigating the effects of a rogue Biorobotic experiment called ‘aama’ which appears to be accelerating the planets evolution at an extraordinary rate, not only producing a range of killer plants and instincts, and biotechnological hybrids, but instilling the planet itself with sentience. The team have to overcome these perilous threats to track down the scientists responsible for releasing ‘aama’ and prevent things spiralling completely out of control.

Obviously referencing the work of Philip K. Dick, the story is beautifully illustrated and psychedelically coloured, to produce a vibrant and visually appealing graphic novel. The text itself is direct and unfussy making ‘aama’ an easy read, although the subtext story of nature versus artificially selected genetic traits that underlies Verloc’s uncomfortable attitude towards ‘aama’, and the implications of biorobotic hybrids and artificially accelerated evolution certainly strike a philosophical chord in today’s World. Ian Pickens