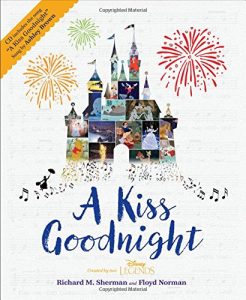 All too often the term ‘legend’ is used without thought which cheapens and reduces it to nothing more than a quick and easy way to describe the innocuous actions of people whose fifteen minutes of social media fame have somehow elevated them to ‘legendary’ status among their peers. That however, isn’t the case with Disney Legends who have earned that status through a lifetime of dedication and hard work and by achieving, in most cases, the remarkable. And the creators of A Kiss Goodnight, Richard M. Sherman and Floyd Norman, have both earned that accolade a hundred times over; and in case you’re not familiar with their names, let me share a few of the reasons why they’re Disney Legends with you.  As one half of the Sherman brothers, Richard was responsible for writing the music for, among others, Mary Poppins, Chitty Chitty Bang Bang and The Jungle Book, wrote the iconic song for It’s A Small World, was a Walt Disney staff songwriter and, oh yes, is also an Oscar and Grammy winning composer. You might not know his name, but I’m willing to bet that you probably grew up listening to and loving his music. Floyd meanwhile is an illustrator, cartoonist and animator who worked on films like The Sword in the Stone, Robin Hood, Mulan and Toy Story 2 and iconic television shows such as Godzilla, The Smurfs, Alvin and The Chipmunks and more recently, Robot Chicken. Like Richard, you might not know his name, but you’ve probably spent hours watching and enjoying, Floyd’s creations.  So whether you were aware of it or not, you already know the writer and artist responsible for A Kiss Goodnight and almost certainly have a soft spot in your heart, no matter how dark, jaded and cynical it may have become through exposure to the daily rigours of modern life, for Floyd and Richard.

A Kiss Goodnight is the story of why every night at every Disney Park ends in a spectacular firework display and why Walt Disney wanted nothing more than to share a little extra magic with each and every person who enters the gates of Disneyland and Walt Disney World and give them a parting gift as they bid the parks goodbye. Part biography, part history, part childrens’ bedtime tale and thoroughly absorbing, Sherman and Norman’s collaborative story pulls you into Walt’s world and conveys just why he thought, and felt, that those last, lingering moments spent in the Parks should be magical and filled with a little more wonder and a final sprinkling of fairy dust. Norman’s unique artwork is beautiful, telling a tale in its own right and his immediate and captivating style is like an embrace from an old friend, warm, inviting and comfortable. Filled with inside jokes,  Disney “secrets” and less than subtle “hidden” moments, Floyd’s illustrations capture the spirit of the story perfectly, while Sherman’s words (with a little help from Brittany Rubiano) fill in the gaps and round A Kiss Goodnight out in spectacular fashion. Wait a minute though; didn’t I say that Sherman was a songwriter, not an author? That’s right I did, didn’t I? So what’s a songwriter doing writing a book instead of writing songs?  Well, he did both, and included with A Kiss Goodnight, is a CD of the eponymously titled song (performed by Ashely Brown) that Sherman wrote for the story, which is a heartfelt, uplifting and endearing ode to the man who believed that we could all be better than we are and wanted to share his vision and dream with the world, Walt Disney. Be warned though folks, have your hankies ready when reading, and listening to, A Kiss Goodnight, as there’s more than a slight possibility, and a good chance, that you’ll get a little misty eyed. Filled with the kind of wonder and awe that Walt was famous for.  A Kiss Goodnight is a must have for any and every Disney fan, young or old, big or small. Tim Cundle