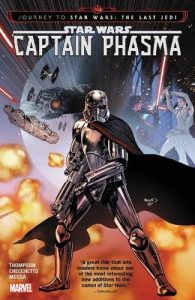 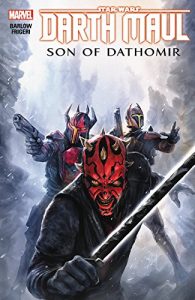 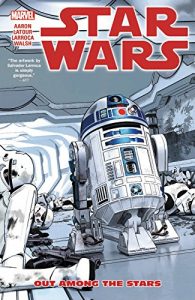 As the cultural juggernaut that is Disney looks set to take over the cinemas and toy shops of the world once more with a third instalment in the franchise in as many years, the comic book galaxy is not far behind in the Journey to The Last Jedi. In Star Wars Captain Phasma, the silver stormtrooper gets her own book would you believe and like the character herself it has great potential and some fine moments but ultimately doesn’t quite live up to what it could be. During The Force Awakens, Phasma came bursting into the action as a badass female stormtrooper who, unlike in previous missives from our beloved galaxy, appeared bestowed with a higher rank than the regular grunts, and a woman to (jack) boot. Ruthless and utterly dedicated to The First Order in the opening scenes, all the good work was undone when at gun point the chrome domed doer of dastardly deeds capitulated and opened the defence shields of the planet destroying Death Star, erm sorry, Starkiller Base. What a wuss! Finishing up being (in a cheeky nod to our original heroes) chucked unceremoniously in to the garbage compactor I was left seriously disappointed with a character who could have been a great bad ‘un with the potential to run and run, instilling fear in any resistance fighters she would run in to. Sort of like Boba Fett in the original trilogy. All enigmatic and mysterious along with obviously being a cold hearted and deadly adversary for anyone unfortunate enough to cross the silver Sith servant.

Phasma now has a chance to put all this right however as she has escaped her ignominious incarceration and as Starkiller Base is under attack we begin our tale. Like a diary entry we discover the wily woman warrior is doing all she can to delete any evidence that it was indeed her who lowered the shields. Deleting computer files is one thing but deleting fellow officers is another and chasing a fellow escapee in a TIE Fighter, along with its commandeered pilot, Phasma heads off in to an adventure on a obscure planet in pursuit of the legging it Lt Rivas. What then unfolds is yet another Star Wars tale of a distant, and previously unknown, planet where a primitive race of indigenous dwellers live in fear of a frightful foe. Phasma and “Pilot” get embroiled in an adventure as they sort of help the locals whilst hunting down their quarry which, well, has been done many times before with protagonists from both the light and dark side. On a positive note, we do get to see the Captain as the single minded, merciless monster she should be throughout. No sympathy for anyone and only completing the mission ever crosses her mind. The callous Captain is rendered brilliantly by Marco Checcetto’s art work but I can’t help feel the tale telling is a letdown. Fun as it is, what we have really is a filler story that treads water and merely explains how Captain Phasma can appear in The Last Jedi. How a woman rose to the rank of “super stormtrooper”, how Phasma became the fearsome shiny silver superior stormtrooper, or a back story of any description is something we will have to wait a little longer for …

If Star Wars Captain Phasma explains how one character survives a seemingly humiliating end, just like Fett in the bowels of the Sarlacc Pit, Darth Maul Son of Dathomir explains what the frightful force wielder from The Phantom Menace got up to after surviving being sliced in two by Obi Wan Kenobi at the climax of Episode One. Yes you read that right! Darth Maul survived being chopped in half. He lived after having his legs separated from his torso and plunging down a vast exhaust chute or something. While being dismembered. Literally chopped in half. Yes. He lived. Survived it. Lordy. I must admit that when I first picked up this title, what with the reference to Dathomir, I figured we were in for a heap of back story and origin tales but no. Apparently not. This caper is set after The Phantom Menace and during The Clone Wars Darth Maul is pretty vexed it has to be said. Having been killed and rejected by his master Darth Sidious it’s understandable. Being killed is enough to make anyone angry isn’t it? Roping in some of the galaxy’s top rogues – the Hutts(!) Black Sun (!!) The Night Brothers of Dathomir (!!!) and an army of Mandalorians (!!!!) – Maul sets out for revenge on Sidious, Count Dooku and General Grievous. What we have here is basically all the bad guys from the extended universe and prequels thrown in to one massive scrap and oh what a hullabaloo! The mayhem is most enjoyable! There’s even one of those lovable Force Witches! Everyone is thoroughly unlikable and it’s more fun for it. It does make me wonder how much better the prequels would have been if they’d have dispensed with the good guys and just let this motley assortment of vile villains and double crossing criminals run riot across the screen. I even forgot that this book starts off with the “Getting cut in half by Obi-Wan Kenobi and being rejected by his former Sith master Darth Sidious isn’t going to defeat Darth Maul!” What next? The Rancour Beast survived having an iron portcullis plunge in to his neck and head? Is Han Solo lying somewhere with a great whole in his chest wondering when someone will come and rescue him? Was the Death Star rebuilt after being blown to smithereens in Star Wars? Oh, hang on …

The final book in the latest trilogy of titles – Star Wars Volume Six: Out Among The Stars – is something of an anthology from the on-going main Star Wars monthly missive. A series of one shots covering a range of characters from the original trilogy era, the main attraction being the daring rescue of C3-PO by everyone’s favourite plucky astromech R2-D2 which ties up the main story arc from the previous instalments. Fabulous artwork and a cheeky level of wit and humour make this a marvelous slice of pulp pandemonium. There’s stormtroopers and Imperial officers chasing their tales as the rescuing  R2 runs riot around a Star Destroyer.  A nice droid-y cameo cum Rogue One reference is thrown in to the mix at one point and all the wit and inventiveness of the original Star Wars is brought to the fore. Loved it. The remainder of the book varies in tone and themes but is always interesting. Rebels in The Wild serves as a pleasant character building exercise (as if we needed more! Of course we do, you can never get enough of it!) between Luke and Leia in the wake of the Screaming Citadel escapade. Sana Starros, a sneaky smuggler is back and up to her neck in treachery while dragging Lando along for the ride in a fast, frenzied and fun frolic which takes in double and triple crossing Hutts, Imperials and pesky pirates! Talking of Hutts and smugglers, everyone’s favourite rogue-ish rebel is transporting one of the giant gangster grubs in the Falcon in The Hutt Run, a tale with a sting in the erm, tail. Literally. There’s plenty more, including a wistful and poignant ode to the sands of Tatooine from a Tusken point of view via Ben Kenobi’s journal and more mayhem and misadventure with familiar faces. I’ve seen mixed reviews of this compendium but I absolutely loved it. The first three films have given us some of, if not the greatest ensemble of characters there’s ever been and the Star Wars galaxy is made for the short story, the back story, the incidental characters and background faces fleshed out. Like a throwback to those Tales of … books that assembled accounts of mayhem and misdeeds while exploring the darker corners of the Cantina and Jabba’s Palace as well as the world of the Bounty Hunter and I’ll tell you what, I can’t get enough of it! Marv Gadgie